What is a Crowdsale? How we developed Crowdsale pack for the CratD2c project

Crowdsale is becoming more and more popular among entrepreneurs not only in the crypto field. In fact, many of them are considering a crowdsale as the better version of Crowdfunding.

There are very logical reasons why. Because it has been adopted by a tremendous amount of ventures and claimed its success. However, it implies risks that we explained in this article.

Here we are going to explain what a Crowdsale actually is. 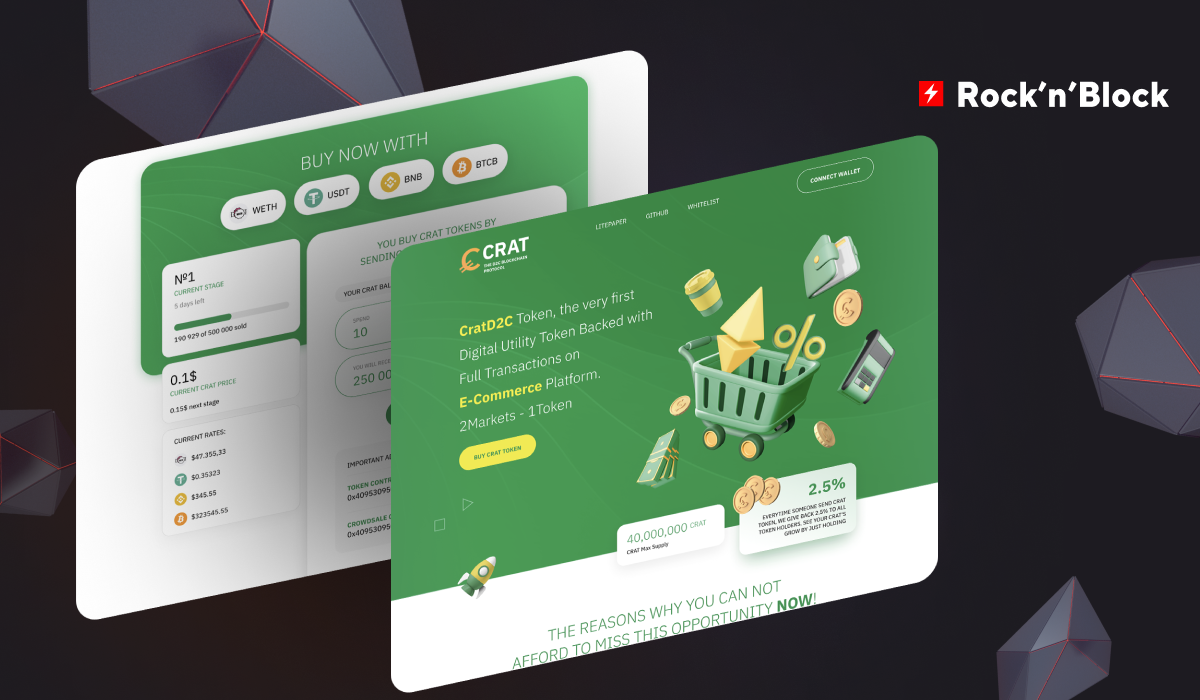 What is a Crowdsale?

Crowdsale is a process of raising funds for launching a future project. Similar to the concept of Crowdfunding when a very promising or innovative project needs investors it is unfolding a crowdfunding campaign in order to raise the funds without one a project can not be implemented in life.

Crowdsale — is a way of legal tokenizing any real-world value asset (or an idea as a valuable asset). That token is meant for sale in this case. Those people who will buy a Crowdsale token are going to be granted participation in the project eventually.

Unlike Crowdfunding, Crowdsale works with the help of smart contracts. And instead of fundraisings investors are buying a crowdsale token.

How does Crowdsale work?

When a project initiator wants to start a Crowdsale contract, first of all, one needs to create a digital token.

However, it depends on the project what kind of token would be created. Reflect tokens are also widely used in a crowdsale process.

Most of the project initiators think of deflationary tokens when it comes to crowdsale. Since they empower a crypto project value due to their scarcity basis. On the other hand, reflect tokens are more attractive for crowdsale investors since they’re receiving tokens that are possible to store or reinvest.

Once a project’s Crowdsale token is developed and launched a project initiator can unfold the whole Crowdsale campaign. The following process mostly consists of Pre-Sale and the Crowdsale stage itself.

Depending on a sale roadmap and structure, some future blockchain projects choose to put effort into the Pre-sale release.

Pre-sale is a process that takes place before the actual Crowdsale only for a limited number of investors, as well as institutional investors. They mostly purchase a crowdsale token of a future project that is prescribed in a tokenomics of a token.

So, if we imagine that 15% of the whole tokens distribution pool goes to the institutional investors or particular private ones, they most likely will invest at the stage of Pre-Sale.

On a stage of a Pre-Sale, most of the future blockchain projects are offering some ultimate advantages of purchasing a token at a Pre-Sale. Those enthusiasts who managed to purchase at the very beginning can get the most unique shares or unique bonus or either participation activity and therefore positively impact the project indeed. That’s why Pre-Sale exists.

The pre-Sale stage is mostly divided into a few tiers where a token price is getting higher up to the finish of the Pre-Sale. For example, a project can have 4 stages or even sub-stages that are scheduled within certain time-frames. Then, it comes the time for a Crowdsale itself.

Sometimes blockchain project initiators skip the stage of Pre-Sale. However, it is a quite powerful tool in the conducting of the whole Token Sale event.

From the first moment of opening an actual Crowdsale campaign, every person who is willing to participate can do that by purchasing a token.

Depending on the length of Crowdsale, it can be separated into a few stages until a project achieves the number of funds that are required to be launched. Since there are no limitations on those who can participate, there are a lot of small private investors involved in a Crowdsale. Crowdsale can have thousands of investors that were able to make small contributions yet lead a project to success.

Crowdsale and Token Sale (ICO) are not entirely bounded. The culprit difference is that when ventures are buying tokens they are not eligible to have a share in a project. Although it depends on the properties of a project, the participation can still be eligible for ventures.

The point is that everybody can launch Crowdfunding to raise the funds for their project at the earliest stage.

It is quite complicated to impose regulations for these activities like Crowdsale or Token Sale. Government entities are implying different regulations and legislation from country to country. Additionally, due to the number of variabilities and nuances of Crowdsale type activities, there is no any-key rule possible. Conversely, in some countries, these types of activities are banned.

Especially because this concept took its place pretty recently. Since 2017 many ventures have begun to be engaged in investment activities based on cryptocurrencies and blockchain projects.

The current risks of Crowdsale projects are as follows:

Every investment activity always involves a risk. Even though activities such as Crowdsale are being considered highly risky for investors, it is a great path for a very promising blockchain project to raise the funds with an idea that solves a unique problem.

As we mentioned earlier the process of crowdsale is regulated by smart contracts. We need smart contracts for transparent regulation of the Crowdsale functioning as a whole.

All the smart contracts are open-source. It means that the smart-contract code can be reproduced on any other machine and run properly.

Crowdsale contracts are always about the following stacks: Solidity and OpenZeppelin library.

Crowdsale contracts can have the following properties that are regulating every stage of a crowdsale. They are also responsible for discounts triggering and managing the security.

For example, when smart contracts regulate crowdsale that is happening within the Ethereum blockchain they will allow investors to purchase a token with ether.

Smart contracts can be developed following two concepts regarding Crowdsale in this case — a soft cap and a hard cap.

A soft cap is inherent in a received amount of funds at which your crowdsale will be considered a success, i.e reached its goal. It is the minimum target that can be set in your project.

Whereas a hard cap is inherent in the maximum amount of funds a crowdsale is about to receive. Some blockchain project initiators can point to a towering cap that is struggling to achieve.

We can distinguish the most common features that are:

More features are possible to implement exclusively for a crowdsale need. Including completely custom ones.

How Rock’n’Block helps with the Crowdsale development

Crowdsale development involves a lot of effort. It is very important to pay a lot of attention to the road map of a project, various smart contracts development, and choosing a blockchain for token development.

You can read this article to get to know how to choose a blockchain.

Check out our landing page about Crowdsale development to have an overview of how the development process goes.

Hence, a crowdsale token can have a different token standard. It also can be different in the way how it functions (Deflationary/Reflect), therefore influencing Crowdsale.

When a token is tested and audited then it is ready for its launch on the crypto market. A token launch is a key stage of the official beginning of a crowdsale. We help to launch tokens by placing them on the application and integrating a payment option with different crypto wallets (or even developing a new one) like Metamask.

When the token is launched, a user can buy it by installing a crypto wallet extension or connecting a crypto wallet address. The process of purchasing a token is controlled by a developed and audited smart contract. That token also can be listed on variable exchanges.

Creating a wireframe involves developing a crowdsale strategy and the design prototype of the future platform.

At this stage, we should determine all the required features and functions that are going to be implemented on a future Token Sale platform.

Writing a whitepaper is nevertheless important as all other stages. The potential investors are going to have their research about your idea based on a whitepaper, tech paper, and other information.

A whitepaper should precisely explain your idea and solution, the problem that is going to solve, and the rewards that it’s offering.

We take care of all the stages in the Token Sale platform development part on the front-end and the back-end side. From choosing a framework, web development, or even mobile app development if such required.

As blockchain developers and blockchain experts, we take care of the development of many crowdsale blockchain projects. We help to expand fundraising opportunities for every project in the crypto world.

Our patterns from CratD2c were tasking Rock’n’Block with the development of a crowdsale pack (including token development and launch, pre-sale plan, crowdsale contract, and Token Sale platform).

CratD2c is a blockchain protocol that is going to allow masses of users to trade digital assets for software products and copyright items, and even freelance services via a blockchain-based marketplace. Smart contracts allow the CratD2c assurance mechanism to protect all parties and maintain transparency of deals conditions locked within the contracts.

The platform is going to run on Binance Smart Chain, therefore CRAT token (BEP-20) is going to conduct all the transactions via the BSC blockchain network.

We have chosen Binance Smart Chain to implement a future platform with the possibility of providing dAPPs.

The marketplace model for CratD2c is meant to bring together the providers of various fields to have a meeting ground to offer products and services and be listed in a marketplace product catalog.

We were helping CratD2c to achieve the following aims for the Crowdsale process future blockchain-based marketplace platform:

The CRAT Token, which has been developed by our team is a core of the current Crowdsale process. CRAT is a digital utility token that is existing in the Binance Smart Chain blockchain network.

The CRAT token is a reflect token. Hence, when a transaction happens a 5% fee is being charged, where 2.5% of that fee redistributes among all token holders. And 2.5% of that fee is locked in the vault for further distribution among Manufacturers and Consumers parties of the CratD2c platform.

We think is needed to clarify, that this is not promotional material for the CratD2c project. We illustrate our case study of CratD2c Crowdsale development. Please, conduct your own research before investing in any project.

Rock’n’Block’s team is not limited only by the development of Crowdsale packs and platforms. We can help with:

All you wanted to know about NFT 10K collectibles

We've brought the full guide about NFT generative collections. NFT 10K and all you wanted to know about this from the perspective of blockchain developers

What exactly Yield Farming is? YDragon: How do we develop a DeFi cross-chain platform?

What is a crypto wallet? Ducatus wallet: a key tool in achieving cashless economy

Example of Ducatus Wallet that developed by Rock’n’Block

Kephi Gallery: How to create and develop an NFT Marketplace?

Rock’n’Block creates special decentralized applications, today we will talk about Tokena a large complex dAPP that is Liquidity Mining + Staking. Here we tell how we did that!

Bitgear: Rock’n’Block development case of an aggregator for crypto DeFi

How do the crypto DeFi aggregators work? Here we tell you how we did develop a project like that