Unfolding Web3. All you need to know about decentralized Web

The decentralized web is coming. And it has to offer fundamental things that are supposed to change the way we are interacting with web applications and services.

Web3 has become too big of a deal to not talk about. Because the Web3 concept is something that defines the focus for the blockchain development industry as a whole.

But what the Web3 concept precisely is? 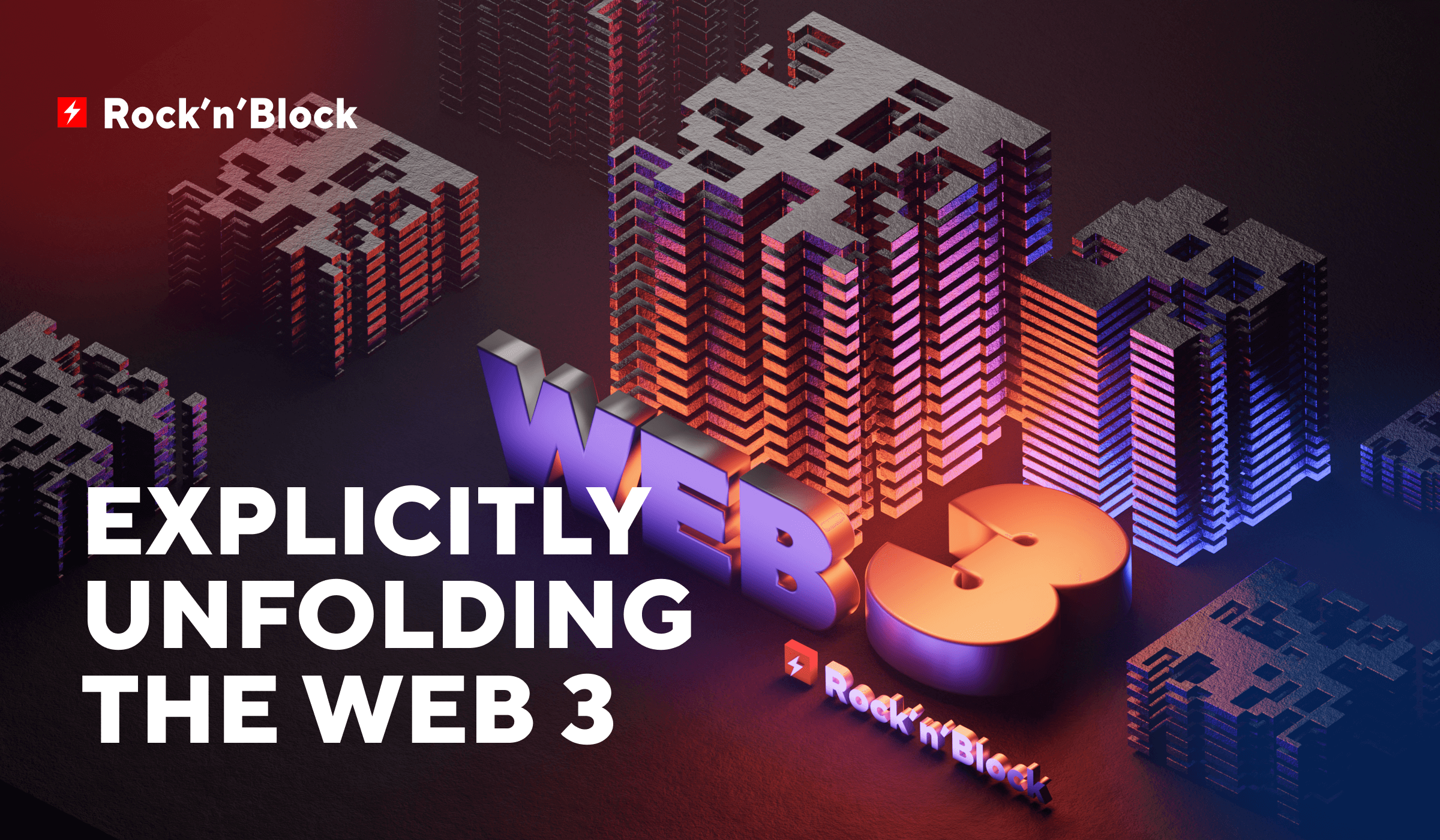 What is the Web3 concept?

Web3 as a term has appeared in 2014. The developer at that time and the co-founder of the Ethereum network Gavin Wood used it in his blog post (the link has been removed, an ironic example of how Web2 works, by the way) to conceptualize his vision around blockchain technology for the future. The text of the “Insights into a Modern World” blog post is published right now on the CoinYuppie, and you can check it here.

In 2022, the concept of Web3 is something that the whole blockchain and crypto space are talking about on a daily basis.

So, what is it about and why everybody is saying that “Web3 is the future”?

First of all, it is important to acknowledge that Web3 is still a concept. It needs a lot more time for the full implementation, and for solving software architecture problems before letting it our for broad user’s adoption.

Web3 concept fundamentally represents the new version of the Internet, where all the counterparties will become decentralized peers. That aims to solve all the issues of the centralized Web that we are currently in. For example, big tech monopoly on social media platforms, excessive regulation, and control of users out there.

All of those problems of Web2 are linked to the nature of the centralized platforms curated by the big tech like Google, Meta (ex, Facebook), etc. The solution is to bring the ability for users to fairly (with the help of decentralization) curate their apps, by contributing, creating, and freely receiving the rewards for their creations, contributions, and interactions.

For example, if you’re aiming to set up the Google Advertisement, and maintain it for a specific time, let’s say for half of the year. You will have to jump through a lot of hoops and face things like — suspension of a campaign without any reason or notification in an advance.

Or another example is the inability of an artist or entrepreneur to fairly monetize their work, without being exposed to the meticulous mechanics of relevant content algorithms. The same goes for product advertisements, which are based on a tremendous stack of users’ sensitive data.

⚠️Important note: However, the goal of Web3 is to remove the middleman between a user/contributor/provider. It’s still having serious privacy issues, due to the fact that the Web3 is going to be implemented based purely on blockchain technology.

Blockchain is one of the fundamentals for the Web3 concept, that helps it to leverage and improve the Internet (the Web) with some crucially important characteristics (that affect users and creators):

Hence the key aim of the Web3 concept is to bring all the benefits of the decentralized Internet how it was in Web1 (read-only), and immersive interactivity of the Web2 platforms. With the blockchain.

To understand it even clearer, let’s dive into the inherency of Web1 and Web2.

When trying to fully grasp the concept of Web 3, in many cases it is mostly illustrated by the development of the whole Web in the past, since it just appeared. Many “internet veterans” remember the Web in its very puberty.

During the time when Web1 was broadly available for users with a PC and the Ethernet input, it was a space barely resembling what is the Internet today.

Containing very basic things (were groundbreaking for those times) like read-only pages filled with some information (the content wasn’t really there) was lacking any interactivity.
Most of the pages that were online in Web 1 were curated exclusively by the creators, by establishing and maintaining their dedicated server. The big tech wasn’t even closely there, in Web1 was no space for sending or receiving information (content) in the way how we used to do it now.

Over a pretty big amount of time, the Web1 has been modernized, the protocols that were governing the functionality of the Web starting to evolve into something bigger — the platforms and ecosystem in an online world of the Internet. The digital world since then.

The vast majority of those improvements were focused on bringing things like interactivity and security to the Web. But mostly the interactivity, to allow people (users of the Web) to connect online, not just by receiving and sending messages.

Responsiveness, user-friendliness, media abundance — all of that has become available only with Web2. The web that we are using right now. But the issue with the big tech has become very uncomfortable for the users.

With the advantages of Web2, we had to face — the invasive exploitation of sensitive private data for the sake of accurate, and beyond efficient advertisement and even surveillance. And what is also important — those data are giving a tremendous level of monopolistic power to the “big tech” (Meta, Google, etc.), avoiding any option for users to influence it, or at least rightfully own it.

The appearance of blockchain technology gave an idea to many users, software developers, and enthusiasts that they are finally found a solution to that issue.

And that was the combination of all decentralized advantages of the Web1 and the interactivity of the Web2 mixed with a transparent and immutable ledger, that supposed to incentives only trustless interaction on a network —

This is how it started. But what about how is it going with the Web3?

Digital ownership in Web3 and NFTs

In the decentralized world, something has to belong to someone without any need to blindly trust any centralized authority that can confirm that «yes, this item is rightfully yours». Especially because digital ownership and ownership in an offline world are hardly regulated by the same instruments (like government and institutions).

On the other hand, we have NFTs in the digital world to represent digital assets. Read this explicit article about NFTs to fully understand the mechanics of NFTs and what is their utility.

But how you can even own something on the Internet?

With Web2 is not possible to own a piece of content or creation in a non-forgeable way.

As the author, writing this article, I am aware that it is my intellectual property. But still, it is very disputable, and a resource where it was published first, can claim that ownership under his name. So, only through a collective negotiation, there is an option to claim this recognized ownership back (like mentioning the author in the header, referring to the author, or publishing within an agreement, etc.).

Digital ownership has become possible with NFTs when a creator is defined by his/her wallet. We need wallets to interact with the blockchain. Read how it works in our full guide about all types of crypto wallets.

NFTs, give a whole space for a user to be a rightful owner of his/her creation or property that has been digitalized or tokenized without running through hoops. NFTs, give much more to users by implying the whole concept of the digital economy, which is another fundamental aspect of Web3. The digital economy allows a user the fair and transparent ability to trade property, and monetize a creation with royalties that are written in smart contracts of NFTs.

And that is not the end pinpoint. NFTs are also essential for Metaverses, advanced social networks, and gaming with rewards.

If the Web3 is the concept of the new Internet of things, Metaverse, coherently implies the advanced and immersive version of social interaction with enhanced digital experience.

Some hidden Web2 evangelists are promoting their vision of Metaverse with the same words, but never mentioning decentralization. But, decentralization is crucial for the existence of an ethical Metaverse, which is not controlled by any Web2 big tech teams and provides a fair experience.

You’ve probably guessed what exactly we mean by hidden Web2 evangelists.
We have the whole article that explicitly tells what is Metaverse, and why Zuckerberg’s Metaverse is doomed to fail. It is fun to read, and also fully informative to grasp the whole Metaverse idea.

Briefly illustrating what Metaverse has to do with the Web3 can be explained in the way that it is an enormous part of the whole Web3 future decentralized ecosystem. Or even current! Since amazing decentralized Metaverses like Decentraland, Sandbox, and My Neighbour Alice already exist.

Metaverse can also represent the advanced vision of digital gaming. But where players and participants are eligible to trade in-game world items and engage freely and fully interactively with the in-game environment. These Play-to-earn models are already using the decentralized economy, which is essential for Web3 and Metaverse as well.

Answering the question “What Metaberse has to do with the Web3” we can fairly conclude, that Metaverse is the part of Web3, but never the other way around.

In the best scenario, if we are even aiming to save the offline world experiences. But that thought deserves a whole different philosophical article about it.

How is it going to work? Platforms vs. Protocols

If you have a thought in your mind like “but why didn’t we just switch all the platforms to a blockchain?” it needs to be said, that most likely that will never happen. Because Web2 and Web3 don’t really go along together.

It is important to understand, that the whole Web3 development has to face a long road until we will have decentralized social media, decentralized music streaming applications, or everything together. We need contributors and Web3 developers like us, for example, to make it happen.

Right now, Web3 is already emerging in the face of NFT space, developing Metaverses, DeFi protocols, and financial storage. We can already interact with Web3 by simply connecting without a crypto wallet like Metamask to a website that supports a connection of it. Think about all the websites, where you can connect with your wallet — DEX, NFT Marketplace, Blockchain bridge, etc.

⚠️But be aware of the security and safety of those connections, because the responsibility for scam and fraud protection will be permanently delegated to a single user (i.e. you, yourself) explicitly and dedicatedly.

Development of the Web3 projects

The demand is continuously growing for blockchain solutions, crypto payment integrations, smart contracts, dAPPS, or even new blockchains. Because we are building for the future of Web3, we have a lot of interest in Web3 software development education. As blockchain developers, we are always searching for all the possible ways to educate and upgrade the Web3 qualifications of our developers.

Anyway, the new Internet of things will still consist of a responsive and user-friendly interface, that’s why any dAPP or Web3 website has two parts:

We take the building of Web 3 to the right path!