What are DAOs in the Web3 world? How are they built and operated?

We see the interest in DAO is very high up. Driven by Web3 idea, cryptocurrencies, and blockchain interoperability it is important to know what DAO is in actuality. This article will navigate you through all fundamentals of DAO, how it works and why you might need one in the future. 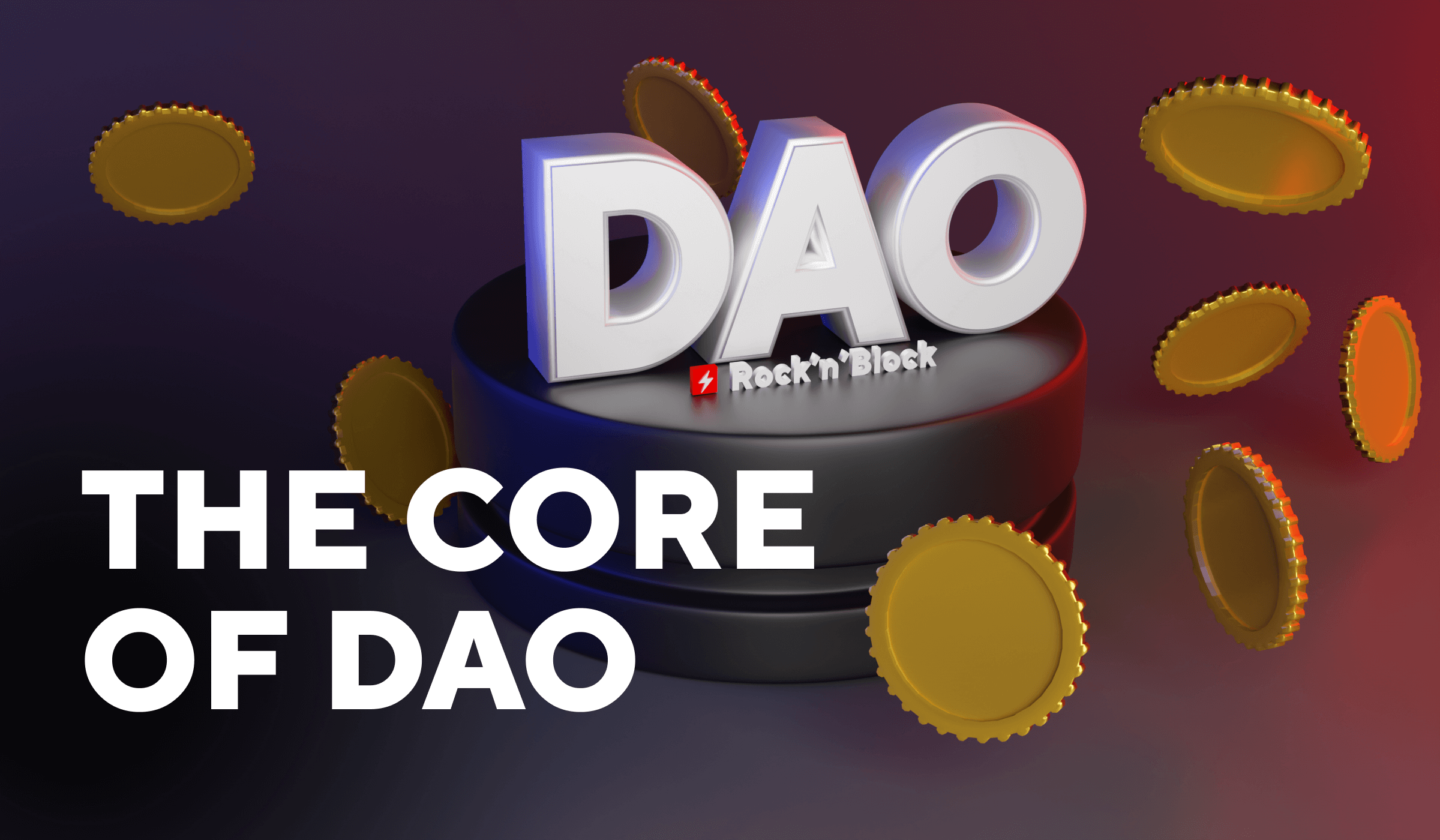 Every blockchain product, project, and protocol follows the basic principle of decentralization. Without decentralization, the concepts of DeFi protocols (decentralized finances), tokenized assets including NFTs, and blockchains wouldn’t make any sense.

Decentralization helps us to communicate with decentralized networks as blockchains independently and fairly, without any middleman or a centralized controller, that decides will your transaction be conducted successfully or not.

For concepts like DAO, decentralization is the key to their existence. The fundamental principle.

The other important aspect which helps DAO to be a truly decentralized organization is OpenSource. Open source code follows ideas of decentralization and helps to make the structure of a DAO transparent and trustworthy.

But what a DAO actually is?

Well, the definition of DAO is a decentralized autonomous organization.

As how we mentioned earlier decentralization is the fundamental aspect of DAO.

But how can an organization be decentralized?

Every DAO is backed by a smart-contract code, which declares the relationships between the members of the DAO and their ownership rights. To refresh your knowledge of smart contracts — we recommend you read this article.

Every DAO in its smart contract allows members to participate in a built-in model of organization for the collective management of funds, and assets, making decisions, voting for decisions and changes, and so on.

Everything for easy, transparent, and permissionless communication between DAOs members.

But what types of organizations DAO can be?

When it’s about DAO, it’s always about the people

It’s logical to assume, that if a certain group of people decides to create a DAO and consequently be members of that DAO they must be bound by the same ideas.
Or they are following the same goal, united by the same ideas, or bounded because of other common reasons.

Just to give some illustrated examples of what DAO can actually be:

Even though, the buzz around DAO may seem very new and fresh the concept has been brought to life in 2016.

Fairly saying, the concept of DAO has been inspired by a group of software developers in 2016, who were members of the Ethereum community. They were driven and inspired by the idea of decentralization in the creation of a solution for a cryptocurrency fund.

This first DAO was ironically called The DAO. And the goal of this DAO was to act as a VC (venture capital) with multiple member-owners. This concept was perfect for excluding any centralized authority (like a bank) to reduce costs, time for capital management, and in theory to improve the process of control by the investor’s funds.

The DAO was established and backed by a convoluted smart contract deployed on the Ethereum blockchain.

The main feature of that smart contract was the fund management feature that would allow companies to make proposals for funding to The DAO.

Read fully about this case of The DAO

How did it work?

The DAO had curators at their disposal to manage these proposal-making processes across the whole DAO. The curators were prominent members of the Ethereum network and community at those times.

One of the DAO members would create a funding proposal that should be approved by curators. After such a proposal is approved (whitelisted) members of The DAO could participate in the vote.

Such a vote was possible for holders of the DAO tokens, i.e the investors of The DAO, that were eligible for a vote on decision-making proposals.

Such proposals should’ve received at least 20% of the quorum, before the number of funds in those proposals could be withdrawn to the whitelisted wallet addresses.

After a certain time, not that long after The DAO was created, the smart contract was exploited and The DAO was hacked due to the loop in that contact.

Well, pretty expectable, because the concept was a custom thing, so it was quite hard to foresee it.

The painful truth is, due to that loop in the smart contract, hackers have managed to steal around 3.6m of ETH which was equal to ~ $70 M at the time of June 2016.

That exploit was called the “recursive call” due to the hacker’s ability to address the smart contract of The DAO requesting to give back the Ether in the time gap before the balance could be even displayed.

Analyzing the possible reasons for this exploit, it was clear that in the very beginning of creating The DAO, the developers just couldn’t foresee this exploit. So they didn’t consider critical that bug of the smart contract when the token balance was displayed only after processing and sending the ETH amount to a different address.

Eventually, the creators of The DAO didn’t have sweet times after that, the following DAO token delisting from all CEXs (centralized exchanges) and the US SEC report saying that “According to the SEC, The DAO violated federal securities laws, along with all of its investors.”

What is important to understand here, is that the exploit could’ve been avoided. As in cases of hacker attacks in the blockchain space, the way to avoid exploits is the smart contract audit. Even though the bug was spotted by the advisors, the time was not on the side of The DAO.

Even though, with all the commotion around The DAO exploit, the original concept of DAO faced a lot of criticism before its broader adoption.

How DAO is operating? Is DAO the opposite of traditional organization?

In DAO we don’t sign papers but sign smart contracts. A core of DAO creators approves and establishes the rules of DAO through the automated execution of smart contracts.

Mostly, a DAO is operating either based on a token-driven membership model or a share-based model.

What does it mean?

Participants of a DAO like this can earn those governance tokens through an active contribution within an organization, or by providing liquidity to the liquidity pools on DeFi platforms.

When someone wants to join a DAO and influence the activities in it, he or she needs to hold that governance token, and also be granted voting rights in that DAO.

On the other hand, share-based DAOs are operating with issuance and implication of proposals, like in the example of The DAO. The share-based membership model of DAO suits more for VC DAOs, or digital currency funds more because they tend to be a bit less permissionless and open because it makes sense for the fund’s management.

Every new participant or someone who wants to join a DAO like this goes through the procedure of submitting a proposal.

The shares of that DAO are represented by the worth of the total fund pool that every DAO member is in charge of. And the fraction of his voting power, which aims to be equal.

What about the differences with a traditional organization?

DAO is not a complete opposite of a traditional organization. At the end of the day, it’s a community, company, cooperative, or team.

The key differences between a traditional organization and a DAO lay in how they document their decisions, conduct the fund’s movements, and include or exclude the participants from their DAO.

The fundamental differences between DAO and traditional organization:

What is the legal power of DAO?

Well, the legal power of a DAO is still under a ton of debate around it. Due to the nature of DAO, it is quite difficult to define or even “physically” see a DAO in an offline world, even though DAO is empowered to create a significant impact on that world.

Quite often, the DAO members collectively decide to establish an LLC, or a non-profit organization if they want to have legal power in the offline world.

The decision for creating a legal entity is always left to the DAO members since there is no clear code of laws that can be applied to a DAO yet.

But for a lot of DAOs out there, it makes a lot of sense sometimes.

Most prominent DAOs in 2022

At the end of 2021 and the beginning of 2022, the demand for a DAO creation has risen as never before. More and more DAOs are about to come, but here are the most prominent DAOs at the moment:

How you can build a DAO? Check if it makes sense for your project to build a DAO

Well, building a DAO starts with creating a community. A lot of DAOs tend to appear from blockchain-specific projects, or from an idea to deliver new crypto/blockchain ideas.

Building a DAO can be a long process if it is more community work. Technically speaking, the creation of a DAO isn’t difficult as long as there is no need for creating a new public blockchain, that would coincide with the DAO ideas or name (for example).

Since that, if you want to deploy your DAO smart contract on one of the known blockchains like Ethereum or Solana, then you should choose the membership model of your DAO.

Will, it be token-based or share-based DAO, and so on?

How is it to build a token-based DAO?

As we already mentioned before, the core of a DAO like that is its governance token and people.

Voting rights should be spread upfront by deploying a smart contract. Every token holder (i.e a DAO member) is given a certain fraction of voting rights in that DAO, mostly in an equal amount of a held governance token.

Since a DAO is issuing the governance tokens (that also can be called a funding process), the treasury of that DAO can be full quite quickly.

When a DAO treasury is full and the funding process is over, it’s time to freeze the agreements, rules, and the creation of a DAO event by deploying a smart contract on a blockchain.
A blockchain should be public and operate on one of the consensus mechanisms, except the Proof of Authority (that is used for private blockchain networks).

After that, when a core DAO smart contract is deployed on a blockchain, there is no return for any changes in the DAO core structure. Any change can be implicated only through a voting mechanism since then.

Since that, a DAO is completely autonomous and decentralized and no entitled authority is eligible to forcingly manipulate the DAOs rules, funds, and decisions in it. All those actions only can be possibly made by the members of that DAO.

Congrats, the DAO is active!

Some examples of why it makes sense to create a DAO for you:

We take the building of a DAO to the right path

What exactly Yield Farming is? YDragon

What is a crowdsale? A pack for CratD2c

Crowdsale is becoming more and more popular among entrepreneurs not only in the crypto field. In fact, many of them are considering a Crowdsale as the better version of Crowdfunding