Staking completely replaces mining and makes it possible to mine new blocks without using a lot of processing power. The point of staking is to provide all blockchain operations and support the operation of the network. Digital coin holders are rewarded for this. 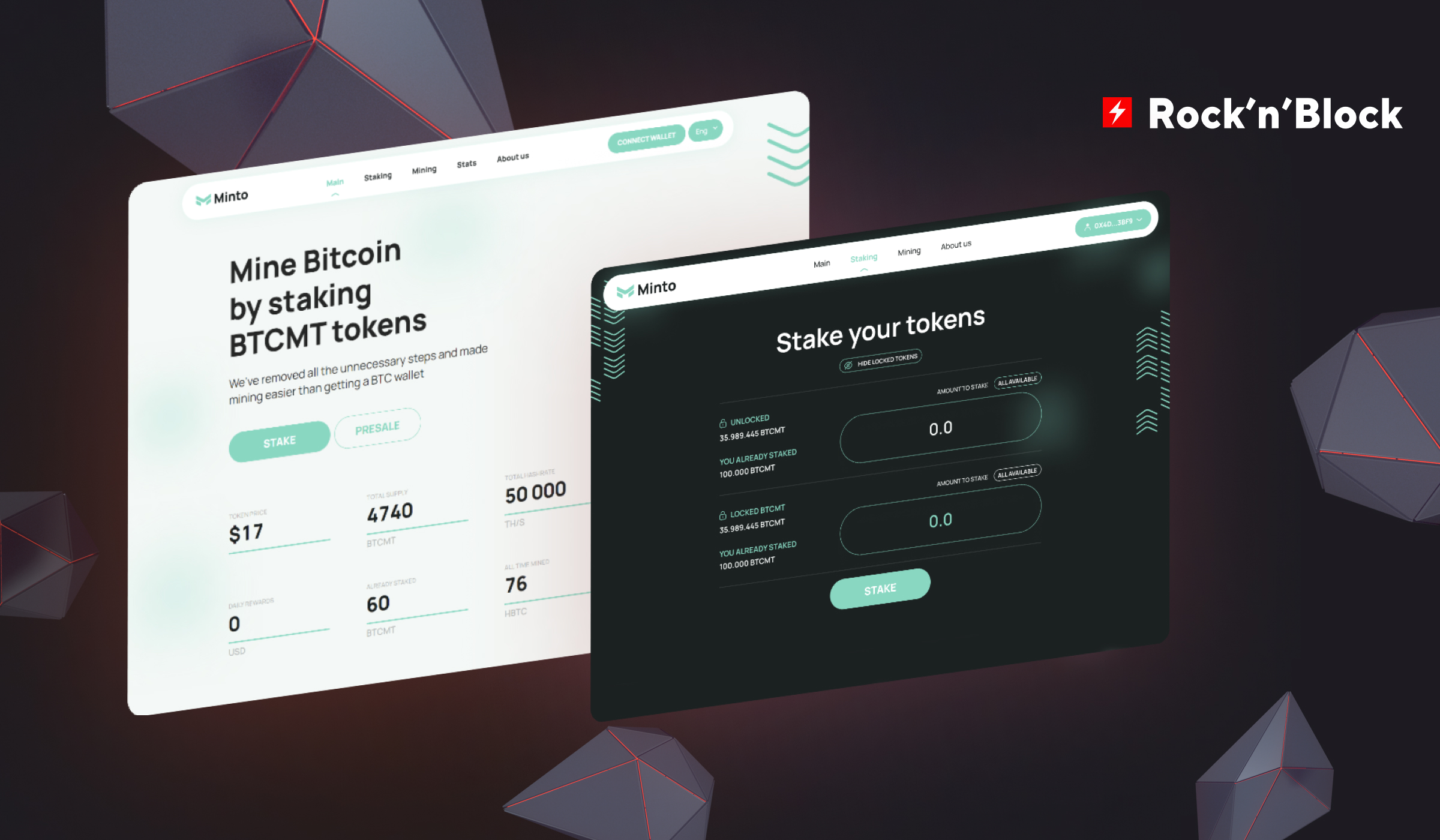 The Minto project is built on HECO Сhain — this is our first big integration with HECO Chain blockchain which has been gaining popularity in recent months and is demanded among Chinese audiences.

It took the Rock’n’Block team 2 months of hard work to create a token contract for BTCMT with added functionality, writing smart contract for staking and daily dividend distribution, building a backend that produces statistics and indicators, and creating an intuitive web design on the frontend and computing power.

Mining Bitcoin by staking BTCMT tokens. We’ve made smart contracts that help to make mining easier than getting a BTC wallet.

What special features did we use in development?

The task is to stake the token to mine Bitcoin.

We have created custom tokens (with minting functionality) with some added features to set Lock value to freeze tokens for a certain time, it’s a way to protect liquidity.

After the token is listed on the DEX, it can be bought and staked on the Minto service.

2. Two wallets are integrated to use the service

One of them is Metamask — the standard solution for the largest number of users.

But a new solution was the addition of Token Pocket — the first time we encountered such a request and fulfilled it.

Token Pocket is a decentralized, multi-chain wallet for Apple and Android. The wallet has many features, including voting, transfers, embedded exchange, asset management, dAPPs store, and market information — it is a wallet that can do it all.

The private key is stored locally, physically isolating important data, and is handled by a three-level encrypted algorithm.

This decision was motivated by the app’s entry into the Chinese market, so a Token Pocket was chosen for the convenience of the Chinese audience. In the same vein, the Minto service has been fully localized into Chinese, with two versions available, English and Chinese.

3. Modernized functionality of the staking process

Our developers have connected a backend to store the staking history with the ability to make custom token withdrawals of any amount regardless of the time frame, correctly calculating the balance.

In addition, we created a potential staking calculator, where the user can enter the desired parameters and get an estimated calculation of token income.

In general, MVP development of such a project can take about 1 month, using the following stack of technologies:

The Rock’n’Block team would like to thank Minto for their trust to participate in the development of an eco decentralized application. Minto uses a transparent working scheme, where a farm using hydroelectric power produces bitcoins (the quantity can be checked in open sources), transfers them into wrapped HBTC tokens, and the staking contract we developed distributes profits among participants. We will consider our first step into eco-friendliness a success.

What exactly Yield Farming is? YDragon

In order to SWAP or trade assets on DEXs, they should have an implementation of a multi-chain or support cross-chain. How is this working out? Rock'n'Block explains

Quarashi ecosystem: How we built a vesting smart contract

Rock’n’Block developers created the vesting smart contract for the Quarashi ecosystem. Here we explain what is vesting contract and we develop projects like that

Rock’n’Block creates special decentralized applications, today we will talk about Tokena a large complex dAPP that is Liquidity Mining + Staking. Here we tell how we did that!

Rock'n'Block was tasked with customizing a smart contract for a decentralized Ethereum options platform in the shortest possible time. Such a service uses an automated market maker to create liquidity and reduce user costs.

DeFi tools and DeFi tokens, how can you develop such tools being a blockchain developer?

How to choose a blockchain platform for your business?

The rapid development of digital technology leads to the need for rapid adaptation of business and technological processes. There is a professional interest in IT developments that can remove the issues that have arisen. When choosing a blockchain platfor