When developing a new crypto project, it always comes to choosing fundamentals that are going to determine the way the whole project functions.

All the blockchain technologies work with the help of certain consensus mechanisms so-called “proofs” like Proof of Stake, Proof of Work, Proof of History. The whole transaction management within a blockchain is dependent on those algorithms, we need them for safely conducting transactions on a blockchain ledger and creating new blocks that are being added to a chain. 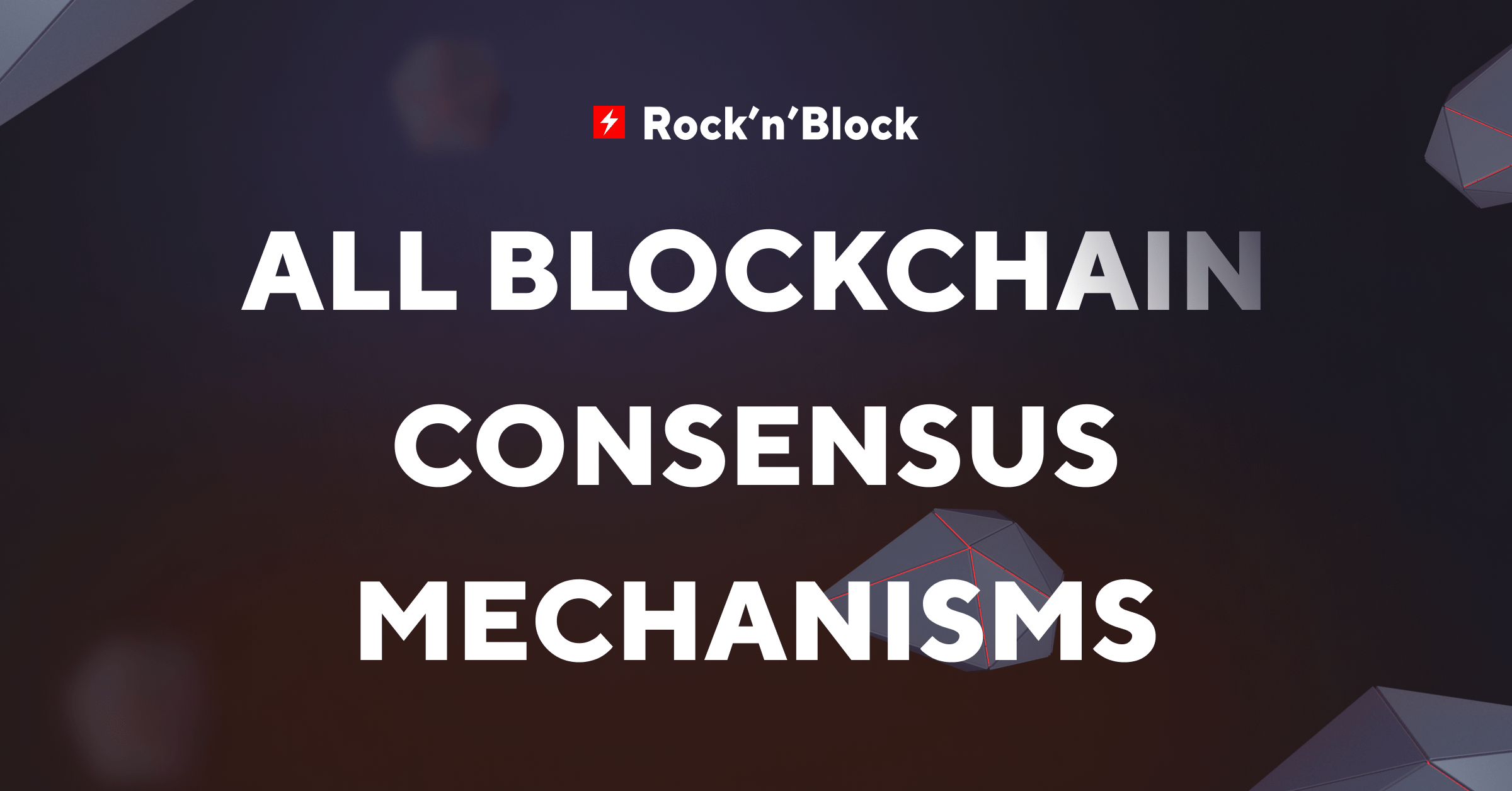 As we are going to explain the inherency of Proof of Work (PoW), Proof of Stake, Proof of History, and Proof of Authority all the blockchain consensus mechanisms.
Let's dive into an understanding of Proof of Stake. without one a blockchain technology can’t conduct transactions properly and in a safe matter.

⚙️ What are these algorithms?

🔒 What are the differences?

⚒ The very first adoption of this algorithm was implemented in Bitcoin. In order to mine the new subsequent blocks after the genesis block on a blockchain (block 0, an initial hardcoded block, that doesn’t refer to previous blocks) Proof of Work, forces a miner to compete with other miners for a chance of solving hash-puzzles that expend a lot of computing energy. That is needed to proffer new blocks that meet the requirements of a blockchain network to be verified.

Nodes (blockchain participants) within a blockchain can verify transactions using Proof of Work in order to eliminate a double transaction record.

💎 Proof of Work requires a lot of computing energy and electrical power, due to hardware solving hash-puzzles process. Eventually, every correct solution that is represented by a miner gets verified by other miners and blockchain participants. So a particular block can be added to a chain, and so, that miner can be rewarded with a block.

You certainly know the prominent cryptocurrencies that are using this consensus mechanism. Among those are Bitcoin, Bitcoin Cash, Ethereum Litecoin. However, they use different cryptographic hash functions.

The evolution of blockchain has proven that Proof of Work is no longer a reasonable consensus mechanism for cryptocurrency projects. Mining and verification take way too long time, and there is no alternative to managing these issues. Furthermore, there is no way of penalizing the fake actors (vicious validators), since that PoW offers weaker security for the whole blockchain that is using this type of mechanism. Still though, trying to forge or attack the network leads to power overconsumption for a potential hacker.

As blockchain developers, we’ve noticed that fewer projects decide to use PoW. In our experience of implementing a whole blockchain for Ducatus Global, we decided to stick along with Proof of Authority and Proof of Stake for DUC and DUCX (Ducatus native coins) consequently.

This consensus mechanism has appeared later than the Proof of Work as the alternative solution to the PoW method of verifying transactions on a blockchain. Conversely, Proof of Stake is way much more energy efficient rather than PoW. In PoS, transactions are getting verified not by the amount of computing power that is explicitly incorporated into a process of solving hashed puzzles.

Instead, PoS offers to every digital asset holder to put their coins at stake (in other words — to lock them in a network pool. This process is controlled by the smart contracts) in order to become a transaction validator in a particular blockchain network. Hence, the network as Ethereum blockchain requires their validators to put at least 32 ETH at stake in the network pool in order to be chosen as a validator.

Furthermore, the algorithms choose their validators based on some requirements as staking age (the total staking duration of a user), or node’s wealth. It is important to understand, that the validators can verify only those blocks, which weren’t created themselves.

Basically, validation trust is guaranteed by the stake amount of a validator. So, when a malicious validator tries to attest a faulty block, it is going to lose all its stake.

The security of a blockchain network running with a PoS is guaranteed by the stakes of validators. If a bad actor would impose a threat to a network, it should have control over 51% amount of staked native coins. Which is quite impossible to achieve.

Further, at least ⅔ of all validators must collectively agree on a transaction or a block creation. If they would fail, then it would lead to a permanent loss of their stake.

However, the PoS method has become to be a better alternative to a PoW and solve issues of it, it is still not mature enough or hack-proven.

Most of the known projects are using PoS purposely, Cardano and Tezos.

Subsequently, that is the core why both PoS and PoW take such a long time and high fees in order to process the transactions.

Blockchain networks that are running on PoS and PoW are verifying transactions way slower due to their inherency. Furthermore, PoW consumes more power resources and requires a tremendous amount of time in order to verify transactions in comparison with centralized payment systems. The approximate time for creating a new block in Ethereum can be at max about 20 minutes, and even longer during the very busy uptimes.

Okay, that is pretty fascinating, but what does it have to do with the Proof of History?

The key to eliminating the PoS and PoW problems had to be highly secure by still using hashes and maintaining the decentralized network’s nature. The culprit for PoS and PoW was that those mechanisms have never dealt with the cryptographic clock. That was the solution.

However, we are explaining the consensus blockchain mechanisms, some experts do not consider the PoH as the blockchain consensus mechanism. PoH is mostly described as the cryptographic clock solution for blockchain networks.

Proof of History is based on the timestamped events (events regarding recording the transactions in a ledger, including creating the new blocks) that are already verified, so nodes (blockchain networks participators, i.e computers) don’t have to continuously interact with each other in order to verify transactions.

⏱ What is the cryptographic clock?

Every timestamp is guaranteed with cryptographic proof of the consecutive time order of events that are going to be put in the historical ledger record.

PoH work in the same way when verifying SHA-256 hashed transactions by using recursive verifiable delay function. Every hashed transaction appeared with a unique and unforgeable timestamp. Similarly to how Google data centers synchronize their so-called atomic clocks to achieve seamless maintaining of data securing solidness and correctness of those data.

Blockchains with PoH are keeping their decentralized nature by implementing a verifying delay function.

So, the timestamps that are integrated with every hashed transaction are not using any centralized time clock source, which can be faulty. Instead, the verifying delay function ensures that every upcoming transaction and a new block proposer must have spent the allowable amount of time in order to be even considered by a network.

All these described mechanisms derive many benefits for the blockchain networks that run on PoH by at least, solving a long time of block creation and verifying new transactions. That opens up a great potential for blockchain running solutions, especially DeFi wise.

We can’t really clearly distinguish the current downsides of the PoH method. However, if in a mechanism like this the core of the whole process is exclusively dependent on timestamp validation, we can assume that some problems may occur only with a faulty verifiable delay function. The risks are quite difficult to assess at this moment.

You may know the most prominent blockchain and crypto project Solana that is initially launched the PoH as the new way of work for blockchain consensus mechanisms. Solana has shown the most positive results from being bounded with PoH, and it is their key game-changing distinction among other blockchain networks.

Also, there is one more blockchain consensus mechanism, that has a unique way of bringing the validator on a blockchain to consensus. Furthermore, this mechanism apparently suits enterprises in the best way.

Read about Proof of Authority in this article.

Which blockchain consensus mechanism is the best fit for enterprises?

Proper smart contracts audits are immensely indispensable for blockchain and crypto projects. We decided to share the most important thing about smart contracts

In order to SWAP or trade assets on DEXs, they should have an implementation of a multi-chain or support cross-chain. How is this working out? Rock'n'Block explains

Quarashi ecosystem: How we built a vesting smart contract contract

Rock’n’Block developers created the vesting smart contract for the Quarashi ecosystem. Here we explain what is vesting contract and we develop projects like that

Bitgear: Rock’n’Block development case of an aggregator for crypto DeFi

How do the crypto DeFi aggregators work? Here we tell you how we did develop a project like that